Pandemic-friendly condos could be coming to the West Loop

Corwin Partners teams up with a developer known for building luxury condos in Chicago's West Loop, specifically designed with the pandemic in mind.

A developer known for building luxury condos in Chicago's West Loop is looking to build 13 more in the trendy neighborhood, this time specifically designed with the pandemic in mind.

Developer ZSD met with the West Central Association Chamber of Commerce Wednesday to discuss plans for a 13-unit building at 1034 W. Madison St. Each condo includes a minimum of four bedrooms with family rooms, offices and outdoor space.

“Now that we are in a pandemic people want more space at home in case they need to quarantine,” said Zev Salomon, principal at ZSD. “You have kids doing e-learning at home and parents working from home so having an extra bedroom, an office or patio space has become important to buyers."

Even though construction is not expected to begin until first quarter 2021, four units costing between $1.8 million and $3.5 million have already been sold.

ZSD is behind Peoria Green, a condo building in the West Loop that ran out of $3 million-and-up units so fast that the Chicago developer changed the plans to add more.

“What I saw with the other development, Peoria Green, was people wanting more unit space and wanting to live in vibrant downtown areas like the West Loop,” said Salomon. “What we have done with this development is try to address those needs to ensure it meets the desire of the buyers.”

Cory Robertson, director of developer services for Jameson Sotheby's International Realty, said the Peoria Green condo development is nearly sold out and that he expects “this development to do the same.”

ZSD is also seeking a special-use permit from the city’s Zoning Board for ground-level retail space that would occupy 1,500 square feet. Ald. Byron Sigcho-Lopez, 25th, whose ward includes the development site at the corner of Madison and Carpenter streets, was unavailable for comment.

No design firm or general contractor has been chosen yet, but delivery is expected by first quarter 2022, according to Salomon. The project is expected to cost $20 million and no lender has been secured yet, “but I think it’s safe to say we may go with our previous lender [Canadian Imperial Bank of Commerce] used for Peoria Green, development,” said Salomon. 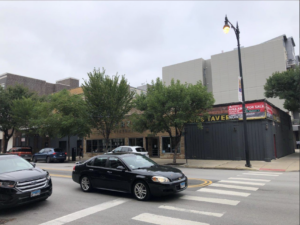