The project is two blocks west of Lincoln Park and Diversey Harbor, and the same distance east from Clark Street shopping and dining. 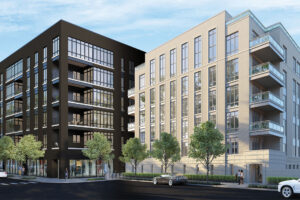 Aiming for families who want to live in Lincoln Park but can't afford the neighborhood's single-family homes, a pair of planned condo buildings will have a rarity: mostly four-bedroom units.

"It's like having a single-family home all on one floor," said Zev Salomon, who is developing the two buildings in partnership with MC Construction. "Four-bedrooms are a gap in the market that we want to fill."

Over 80 percent of the units in the two buildings on Hampden Court will have four bedrooms plus a den or office space, which means that fourth bedroom is more likely to be used as a bedroom.

Of the 4,374 condominiums on the market in the city of Chicago as of yesterday, 247 were four-bedrooms, according to Midwest Real Estate Data. That's about 5 percent.

In Lincoln Park it's about 12 percent: 35 of the 300 listed condos. These figures include both planned and existing condos.

Salomon's project, called the Hampdens, is two six-story buildings with a combined 45 units. Of them, 38 are four-bedrooms. Four are three-bedrooms, with a den, and three are five-bedroom penthouses.

Buyers have reserved five of the condos in the 15-unit south building, at 2753 N. Hampden Court, and construction should start by the end of the year, Salomon said. First move-ins would be in late 2018.

All condos in the 2753 building will have direct elevator access into the unit. Prices in the building run from just under $1.2 million for a three-bedroom to nearly $3 million for the 4,600-square-foot, two-level penthouse.

In the north building, at 2773 N. Hampden, all 30 units will be four-bedrooms, but without private elevator access. Prices start at about $900,000 and go to almost $1.5 million. This building is on the corner with busy Diversey Parkway, while the other is tucked farther down Hampden Court, a short, quiet street.

The project is two blocks west of Lincoln Park and Diversey Harbor, and the same distance east from Clark Street shopping and dining. Designed by architecture firm Sullivan Goulette & Wilson, the brick-clad buildings will occupy the site of a now-demolished grocery store that faced Diversey, and a parking lot behind it on Hampden Court.

The previous owners had proposed a 17-story building on the site but failed to get aldermanic approval and in March sold the parcel to an entity headed by Salomon. The purchase price was almost $3.9 million, according to the Cook County Recorder of Deeds.

Sales in the Hampdens project are being handled by Cory Robertson of Corwin Partners at Jameson Sotheby's International Realty.